What you can do with our machine

In addition to detecting foreign bodies such as minute metals, bones, glass, and stones, various inspections such as shape inspection for cracks and chippings, weight inspection (estimated mass), and Qty measurement are possible.
A wide range of items can be inspected at the same time by customizing strong area of each inspection system in combination. 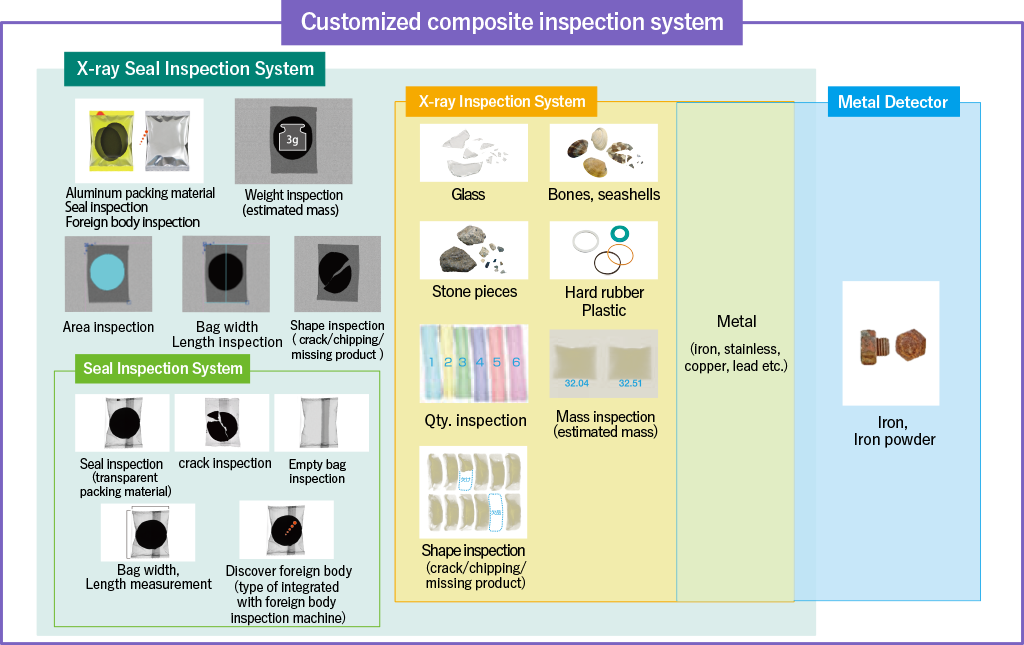 Taking one of food product as an example, it goes through various processes, such as being processed at multiple factories, and finally reaches the consumer.
If a foreign body is accidentally mixed in somewhere, being checked by a foreign body inspection machine many a time so it will not proceed the next step in a dangerous state. So safety and peace of mind are maintained.

This metal detector is an inspection system most widely used as a system that detects a foreign body mixed with products. Various types of metals such as iron and stainless steel can be detected. It reacts with high sensitivity to thin foil-like metal, powdery metal such as rust, and printing ink containing metal components.
It is a machine that finds foreign body by utilizing the fact that the magnetic field (line of magnetic force) changes when metal passes.
When metal is mixed in the object, the magnetic field generated by the machine changes due to the influence, and the metal is detected by detecting the change. 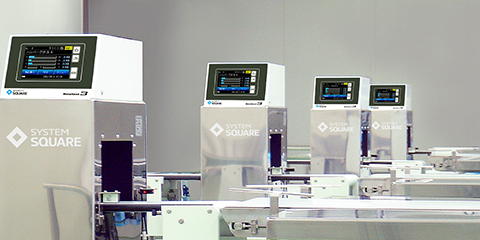 Metal that is easy to detect / hard to detect

There are magnetic and non-magnetic materials. Iron attracted to a magnet is a magnetic substance and is the most easily detected metal. Metals that do not attract to magnets are non-magnetic, and stainless steel is the most difficult metal to detect. Since the minimum size that can be detected differs depending on the type of metal, there are two types of test pieces that measure the capacity of the metal detector: iron and stainless steel (SUS304). 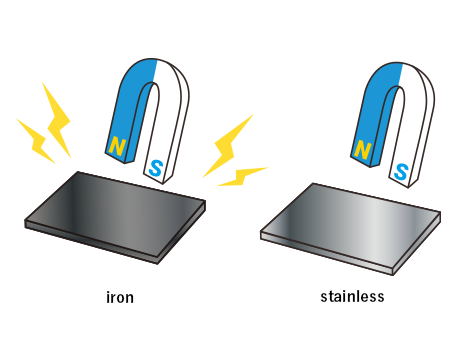 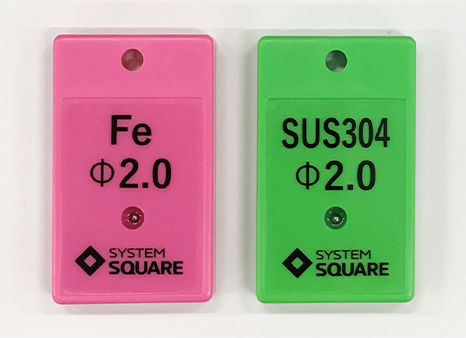 About effect of the product

The product that you want to inspect itself also affects the magnetic field generated by the machine. This is called effect of the product.
Products that contain a lot of moisture and salt, or products that contain metal components in the packaging material, such as aluminum vapor-deposited packaging, have a larger effect of the product.
If the effect of the product is large, the foreign body reaction will be drowned out and inspection accuracy will decrease. In the System Square's metal detector, in order to reduce the effect of products, various technologies have been introduced to realize highly sensitive foreign body inspection.

To get better sensitivity

If you understand characteristic of metal detector, you can use machine by more high sensibility.

Choose a coil opening that is as small as possible according to the size of the product.

Higher sensitivity can be expected by inspecting individually wrapped rather than passing many product through the machine all together.

The higher the product temperature, the larger the effect of the product and the lower the sensitivity. It is effective to keep the temperature low and to keep it from changing. 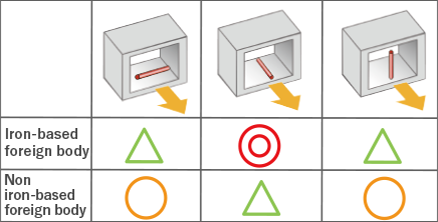 The X-ray inspection system can see the inside of the object through the same principle as X-ray photography.
X-rays are made into a thin beam to irradiate the product to be inspected, and the transmission amount is measured with a semiconductor type line sensor and taken as an image. Analyzes the captured monochrome X-ray transmission images and automatically distinguishes foreign body from images. In addition to metal, foreign body such as stone, glass, bone, and hard rubber can be detected. 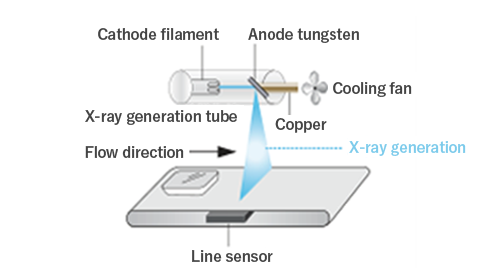 The X-ray irradiated from the X-ray generation tube reaches the line sensor through a product to be inspected. Images are captured based on the measured transmission amount. X-ray transmission images that have been captured are analyzed to automatically judge foreign bodies and others.
Shutting down the current will stop the X-ray immediately.
When the tube voltage is increased, the wavelength of the X-ray becomes short to increase the transmission capability. This is effective to detect thick products to be inspected and foreign bodies with a high density. Detection of foreign bodies with a low density may be improved by decreasing the tube voltage.

The following inspections can be performed at the same time.

Foreign bodies made from various materials can be detected.

Inside inspection of metallic packing materials

Inspect shape faults such as crack, or chipping.

Inspect excess and deficiency of Qty.

Any part can be excluded from the inspection target or inspected separately.

Relative mass (weight) can be inspected using density. It is possible to inspect even product that can not be inspected by a mass meter and that are in the form of loose pieces or strings. Also, there are cases where inspection can be performed with higher accuracy than a mass meter during high-speed conveyance.

The X-ray inspection system is so designed that the inside of an article can be seen clearly by utilizing the principles that are basically the same as the X-ray radiography. Soft X-ray with small energy among X-rays is used for the X-ray inspection.

X-ray inspection sytems are designed to be much lower than the exposure received from the natural world in daily life and are safe.
For that reason, it can be used without special handling ualifications.

Difference between radiation and radioactivity

It is safe because the X-ray generation can be stopped instantly by turning off the power of the device.

In the process of packaging the object, the packaging film is crimped by applying heat and pressure to close the opening. Closing by crimping is called sealing, but if a foreign body bites into that part, sealing will be incomplete. The seal inspection system inspects it.

Jam defects are an important inspection because they not only make the packaging look bad, but also significantly impair the preservation of the contents and are related to safety and security. System Square's seal inspection system uses an optical camera (a camera that captures visible light) (SLS), and in addition to that, an X-ray (a mechanism that captures the interior with invisible light) There are two types of hybrid inspection system (SXS). 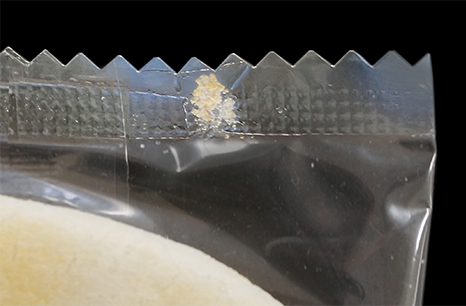 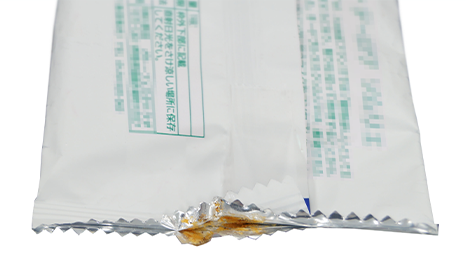 What you can do with our machine 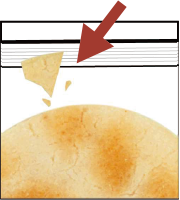 Fragments, broken pieces, or seal faults of the seal parts are detected to reject the product.

Too long or too short

Package with an abnormal size due to packing machine failure can be detected to reject the product. 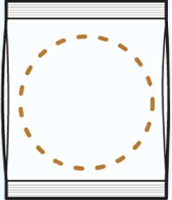 Empty bag containing no product can be detected to reject the product. 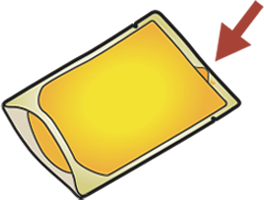 Various jams from liquid to semi-solid in the seal parts can be detected to reject the product. 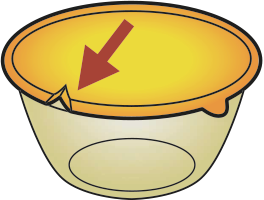 Jam, seal fault, or package fault that occurs in the seal part around the cup container can be detected to reject the product 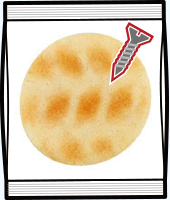 Connected packages due to package separation failure can be detected to reject the product. 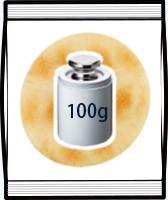 Relative weight inspection based on X-ray images. The weight is measured using the X-ray. 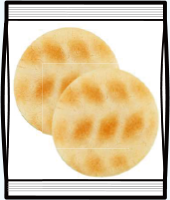 1-piece pack bag product containing a quantity more than the specified level can be detected to reject the product.

Too large or too small

Area, width, and length of the product are measured to detect and reject the product not satisfying the specified size. 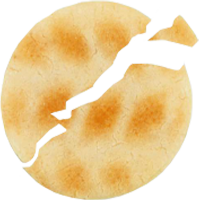 Faults such as product fracture, chipping, or crack from the outer periphery can be detected. 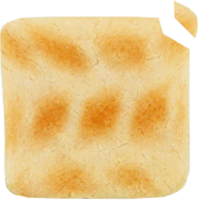 It is possible to detect chipping that has occurred in the corner of the product. 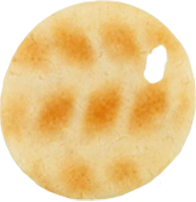 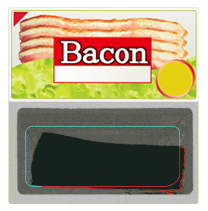 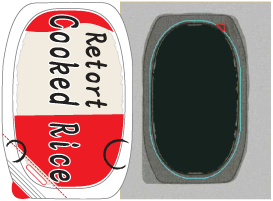 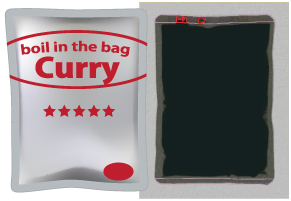 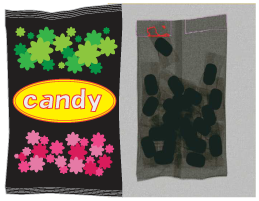 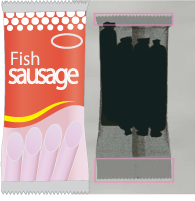 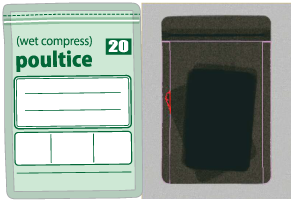 For machine using optical cameras(SLS), it is effective when the seal of the inspection target is transparent. The hybrid inspection system(SXS) is suitable for inspection of all packaging materials.